Reigning Miss Super Talent World, Runner-Up Imlibenla Wati has decided to join politics. She has declared that she will contest in the upcoming Municipal Council elections from Aongza ward, Mokokchung, Nagaland.

She made history by becoming the first Naga to win national and international beauty pageants. She has also been involved in various charity works, medical camps. Imlibenla had recently declared in an international platform that her aim in life was to be a statesperson. 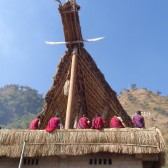